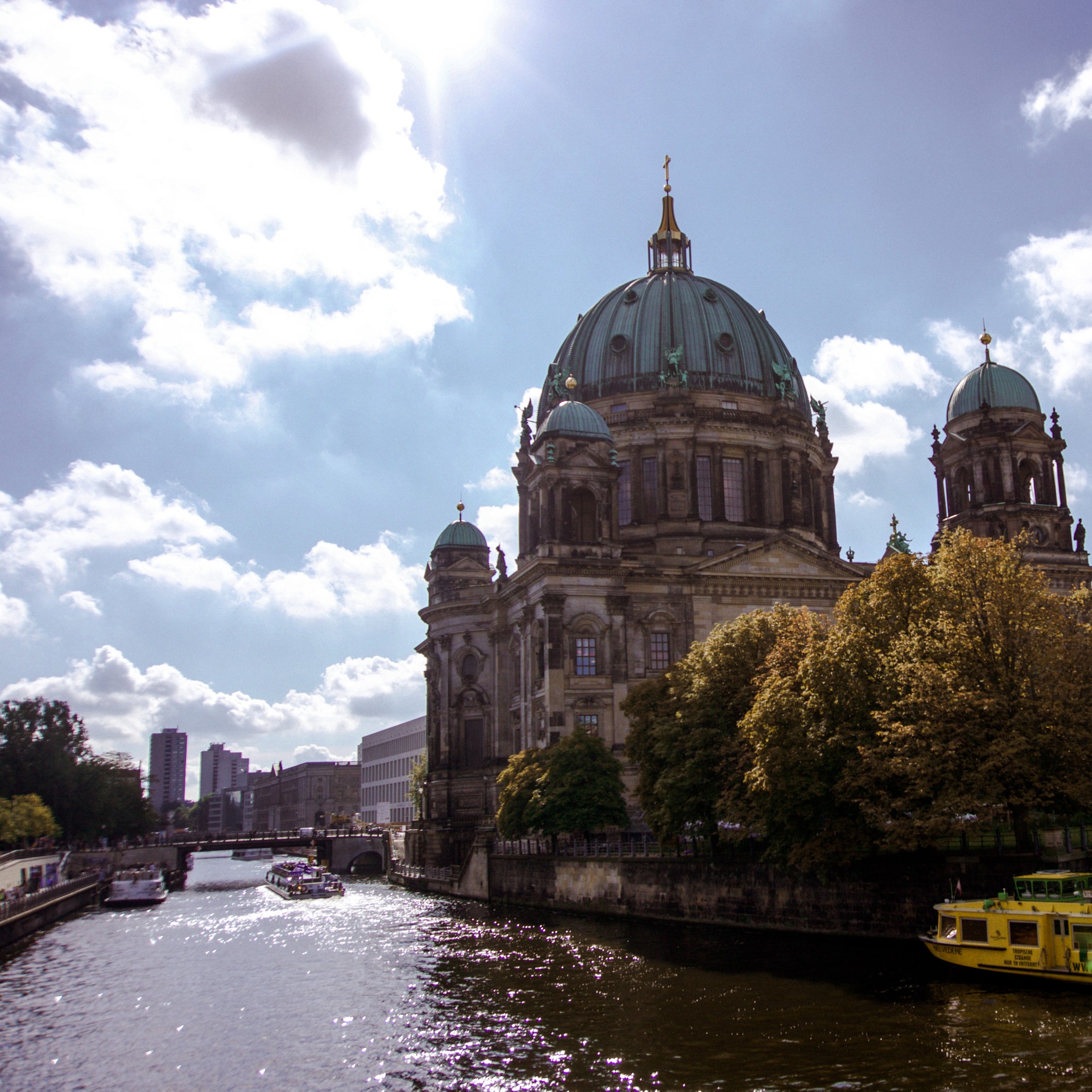 If you’ve visited Berlin in the past few years you’ll know that there is absolutely no shortage of vegan restaurants, cafés and vegan-friendly options in general. I’ve recently travelled to Berlin twice and I must say, I’m still overwhelmed with how integrated veganism is in the mainstream society in Berlin. It literally feels like being vegan is the most normal thing you could do. Apart from the 50+ vegan-only eateries, you’ll find almost anything you’re looking for, including a completely vegan supermarket, vegan clothes and shoes shops, vegan street markets, food trucks, and even a vegan sex shop!

With over 1 million vegans living in Germany (and a large part of them in Berlin), the city has quickly developed into vegan heaven. Fancy a delicious burger with sweet potato fries? No problem! Movie night with vegan pizza and ice cream? You got it! You’ll even find spectacular vegan all-you-can-eat brunches with pastries, scrambled tofu, Nutella, other delicious spreads, and amazing vegan street markets, featuring hip food trucks, sustainable vegan fashion, fresh produce, and sugar cane juice! It’s literally a dream come true. 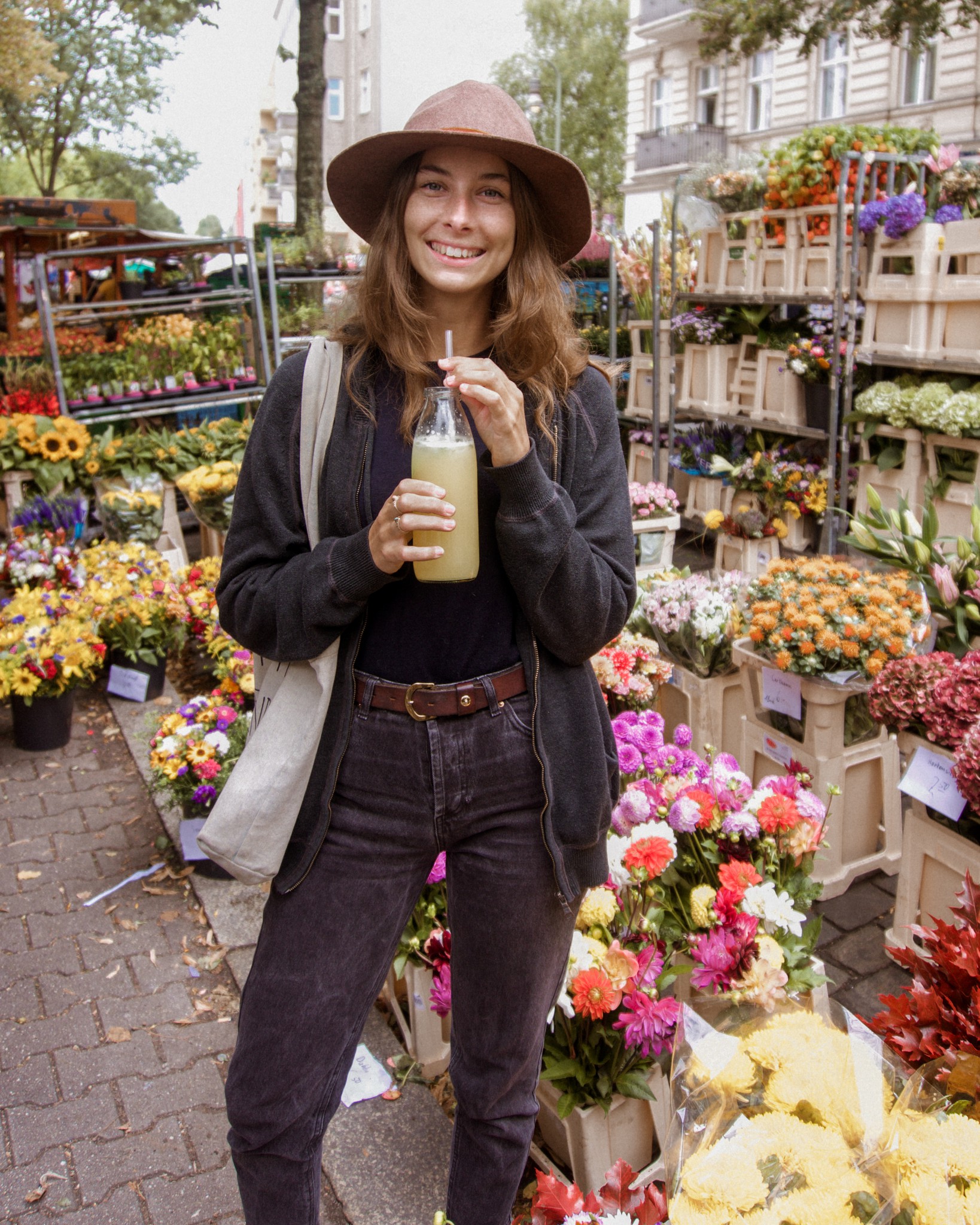 As you can imagine, during my 2 weeks there, I tried out as many places as I could and decided to share my accumulated knowledge with the world. 😉

Make sure to check out the video for a general idea of what to expect when visiting Berlin. Below you’ll find more detailed descriptions about all my recommendations!

Feel free to add additional places that I might have forgotten in the comments down below! 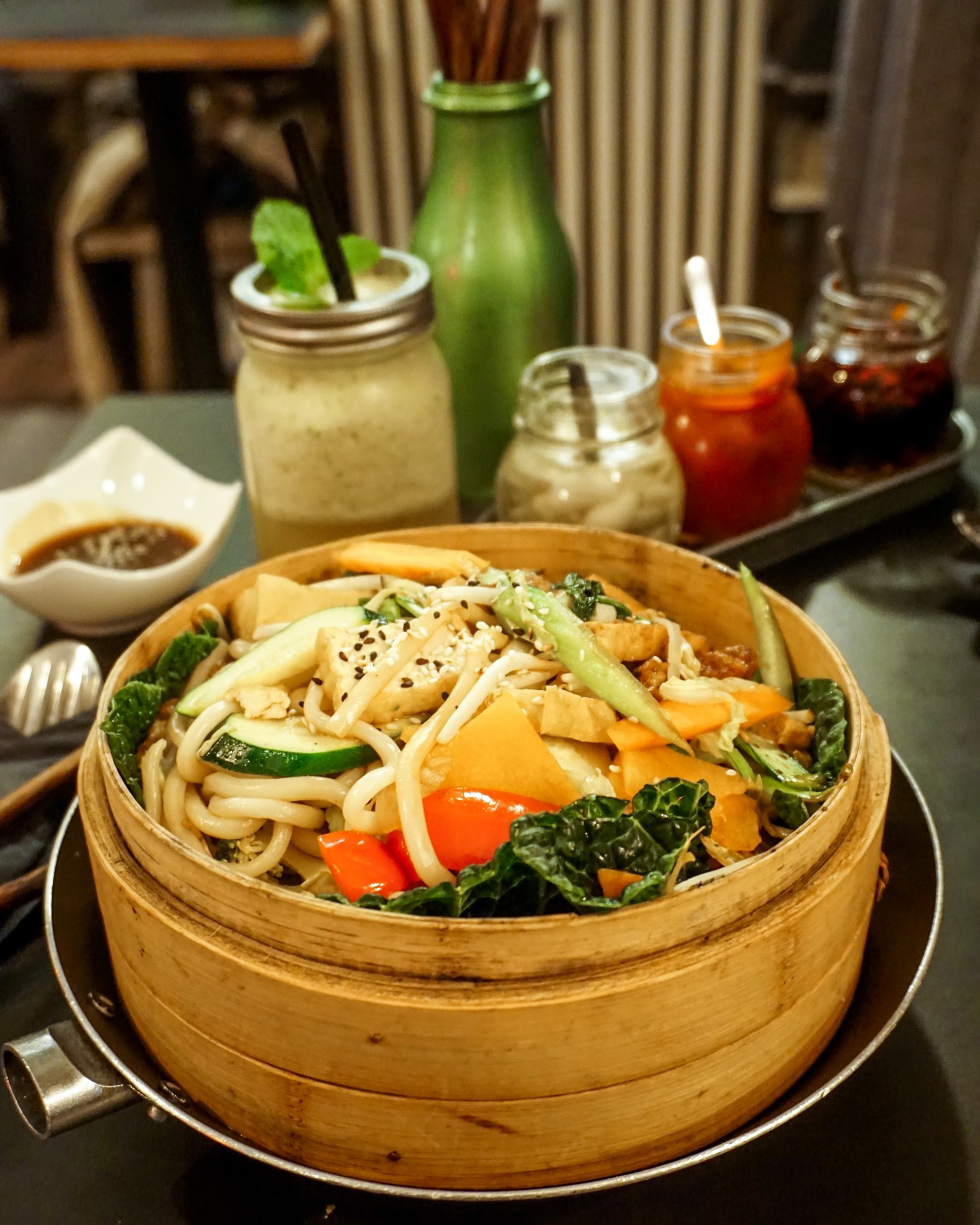 To my surprise, there’s a vietnamese restaurant with at least a few vegan options on every second corner in Berlin! I’ve tried out a few and Cat Tuong – an all vegan vietnamese paradise – is one of my absolute favorites! The restaurant is beautifully decorated but rather small, hence on the weekend I recommend to call in advance to reserve a table! They have a divine menu, made with lost of love! I highly recommend the Mi Quang soup (a bit spicy, but SO flavourful), Goi Cuon (yummy fresh ricepaper rolls with peanut-hoisin dip), Udon noodles with steamed veggies and the Zen smoothie (super refreshing and delicious)! 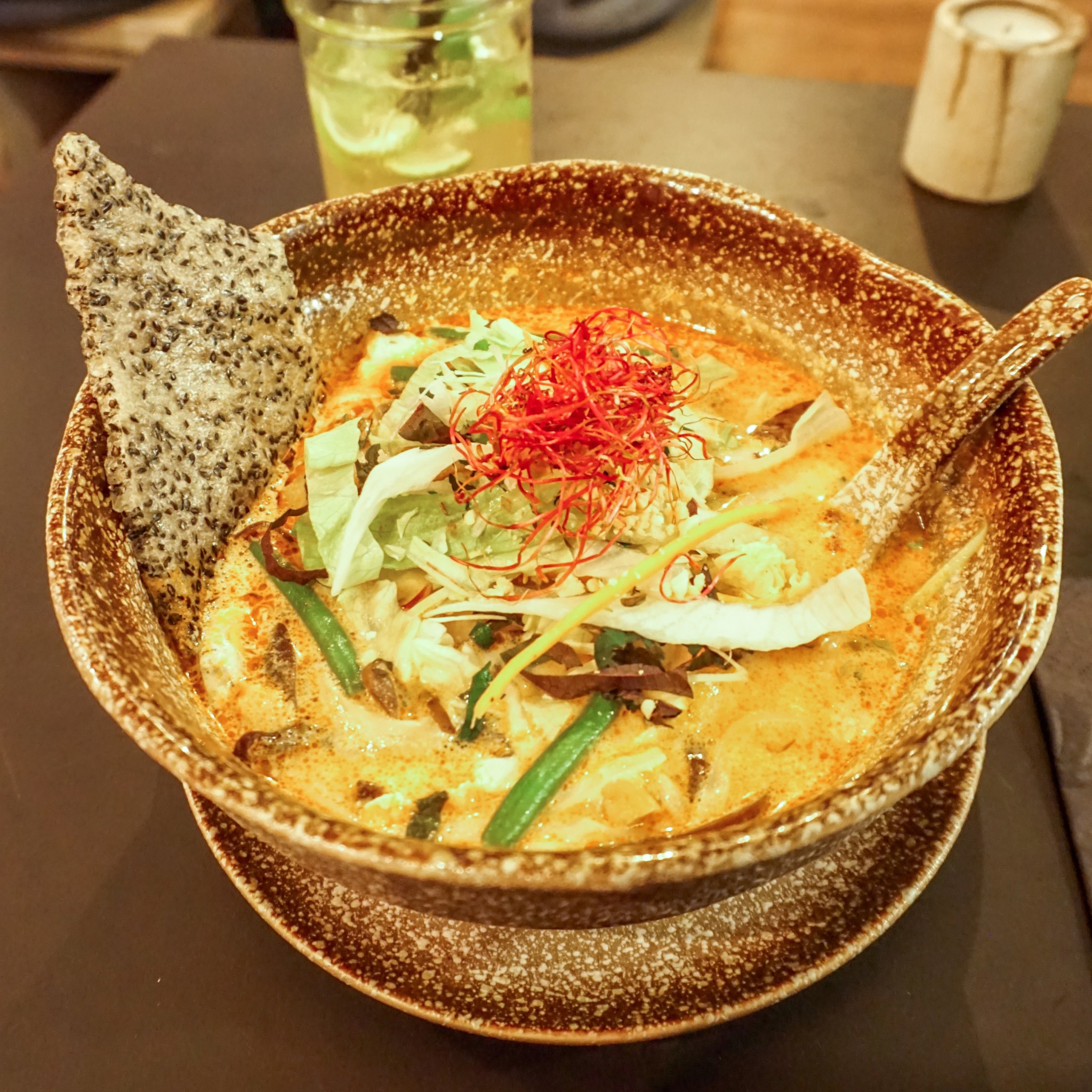 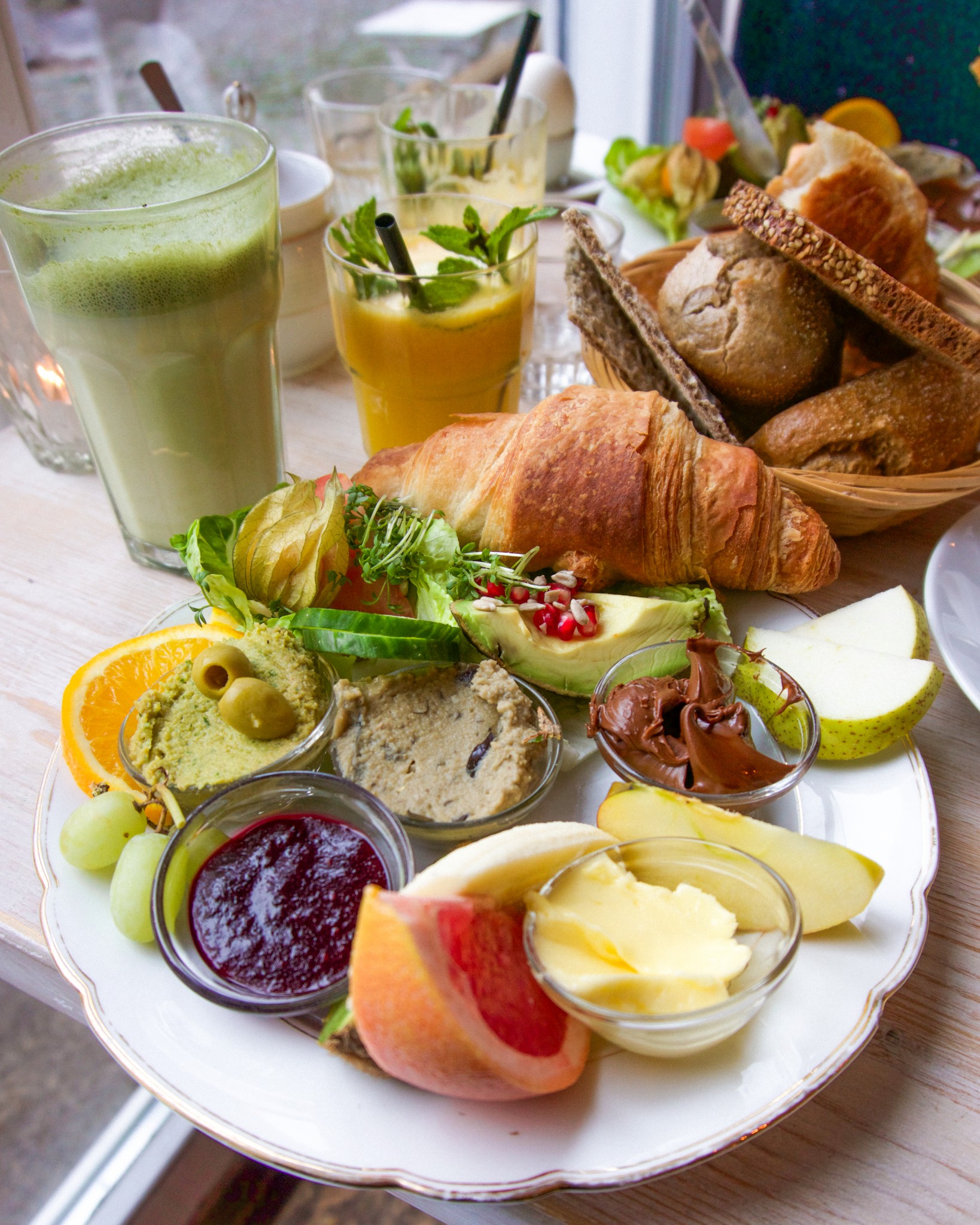 I discovered this little gem – Café Neue Liebe – through a friend who lives in the area and immediately fell in love with the food! As the name states, it was ‘new love’ at first sight! 🙂 I tried the ‘vegan love’ breakfast, which comes with bread, fresh croissant, fresh fruits and spreads. I’d just recommend replacing the red lentil paste with vegan Nutella for the ultimate spread! 😉 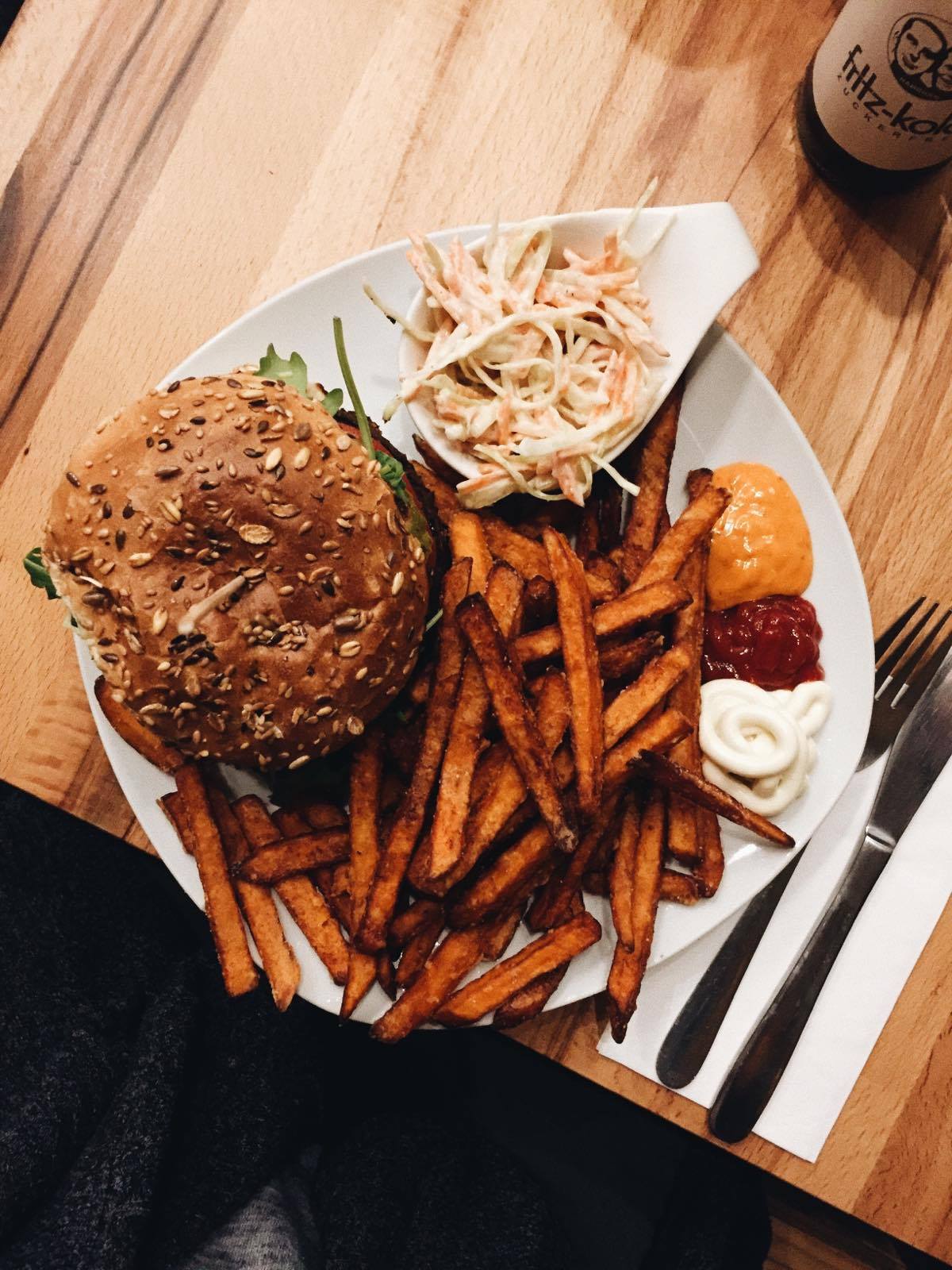 Lia’s Kitchen was highly recommended to me and it surely didn’t disappoint! It’s an all vegan burger place and really worth a try. If you’re looking for your fix of delicious vegan burgers with sweet potato fries and a number of sauces – that’s it! The restaurant is rather small with only a few tables but it’s totally worth it. It is run by 2 Israelis that live in Berlin and the portions are huge! I tried the Smokey Mushroom BBQ burger but it was way to spicy for me, hence if you’re a bit sensitive, go for the Quinoa Lentil burger, which is divine. You can add extra melted vegan cheese or jalapeños and get sweet potato fries as part of the package deal!

I went to Café Morgenrot for Sunday brunch and was absolutely delighted! They have an incredible vegan/vegetarian all-you-can eat buffet with homemade spreads, scrambled eggs, pickled tofu and much more! The great thing is – the breakfast costs between 6-12€ – and you decide how much it was worth to you. Lovely concept that seems to work well! 🙂 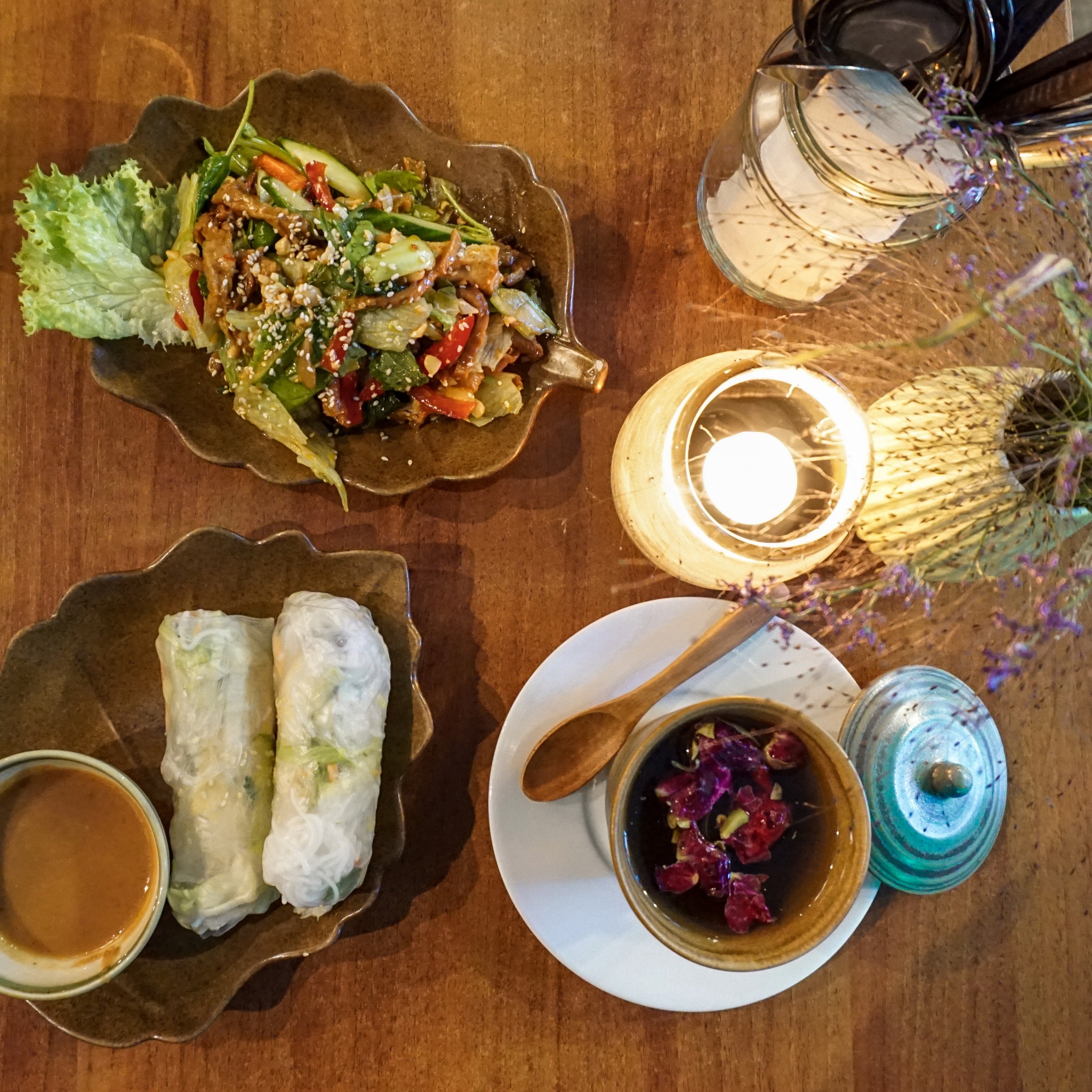 Back to vietnamese food, SOY is another all vegan vietnamese heaven with a totally different atmosphere than Cat Tuong. It’s much bigger, but very popular, hence reservation is also recommended here on the weekend. Make sure to try the Banh Trang Tron, which was incredibly yummy, the Goi Cuon, and basically any main dish as they’re probably all crazy delicious! 😀 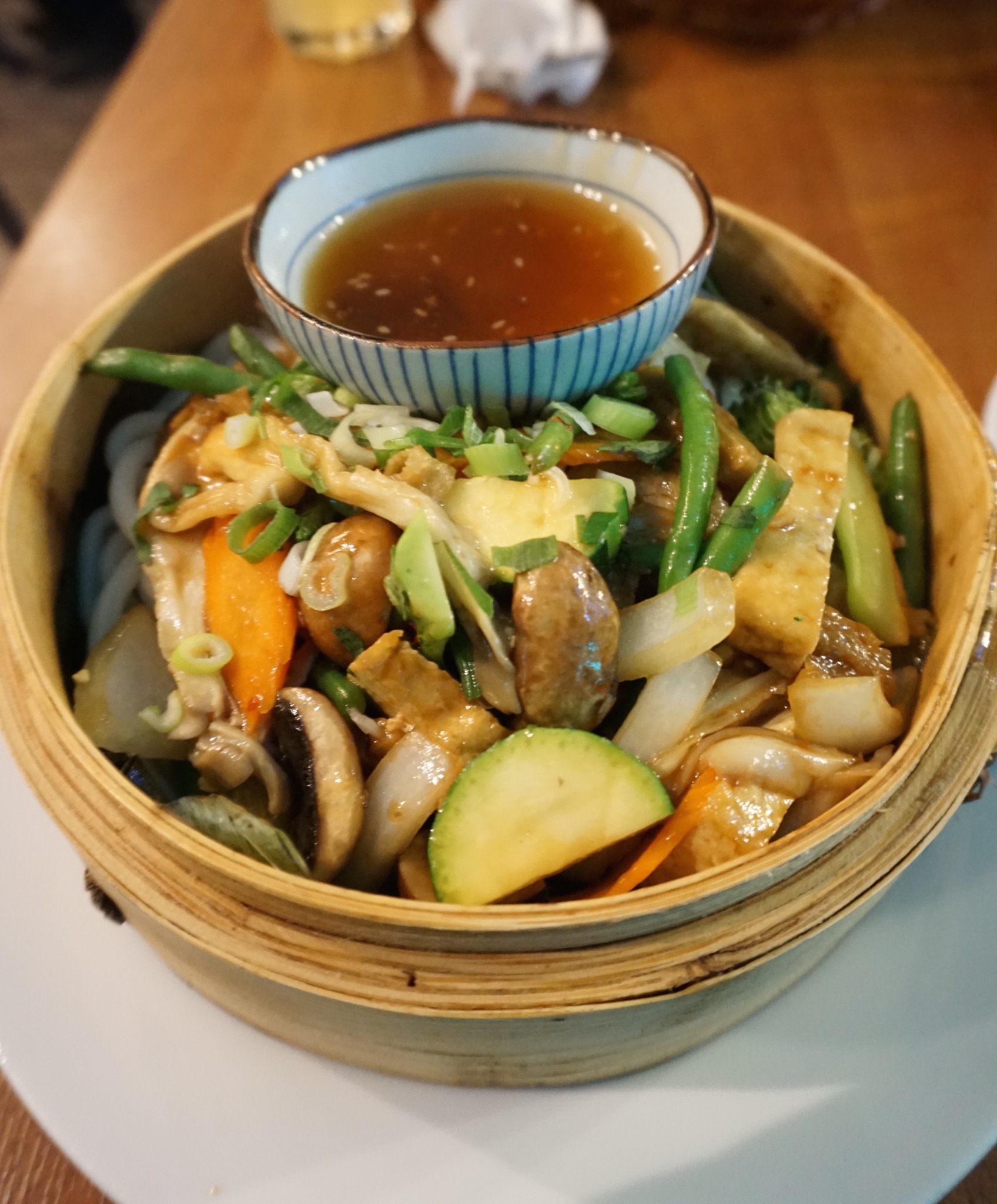 The Bowl is your destination to recover from all the vegan junk food and make some time for good old clean eating. You’ll find delicious smoothies, buddha bowls, and every whole foods – healthy meets delicious! 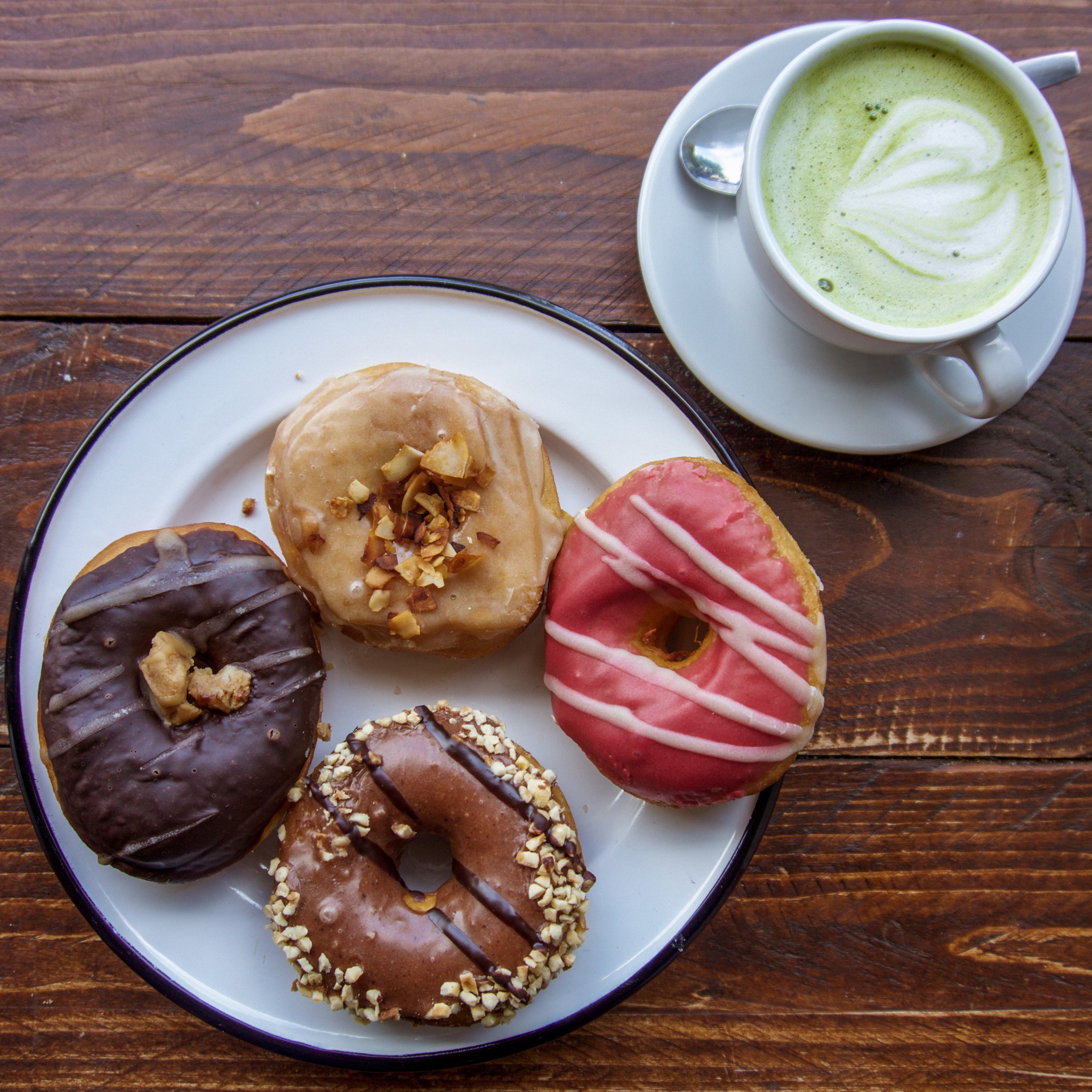 Welcome to vegan donut heaven! Brammibal’s Donuts is a lovely little coffee place with a wide variety of delicious donuts, yummy drinks and really good sandwiches. Make sure to go in the morning, as certain things sell out at some point during the day! Just go – nothing to add here. Ps: Smoked maple coconut and nougat are my favorites! 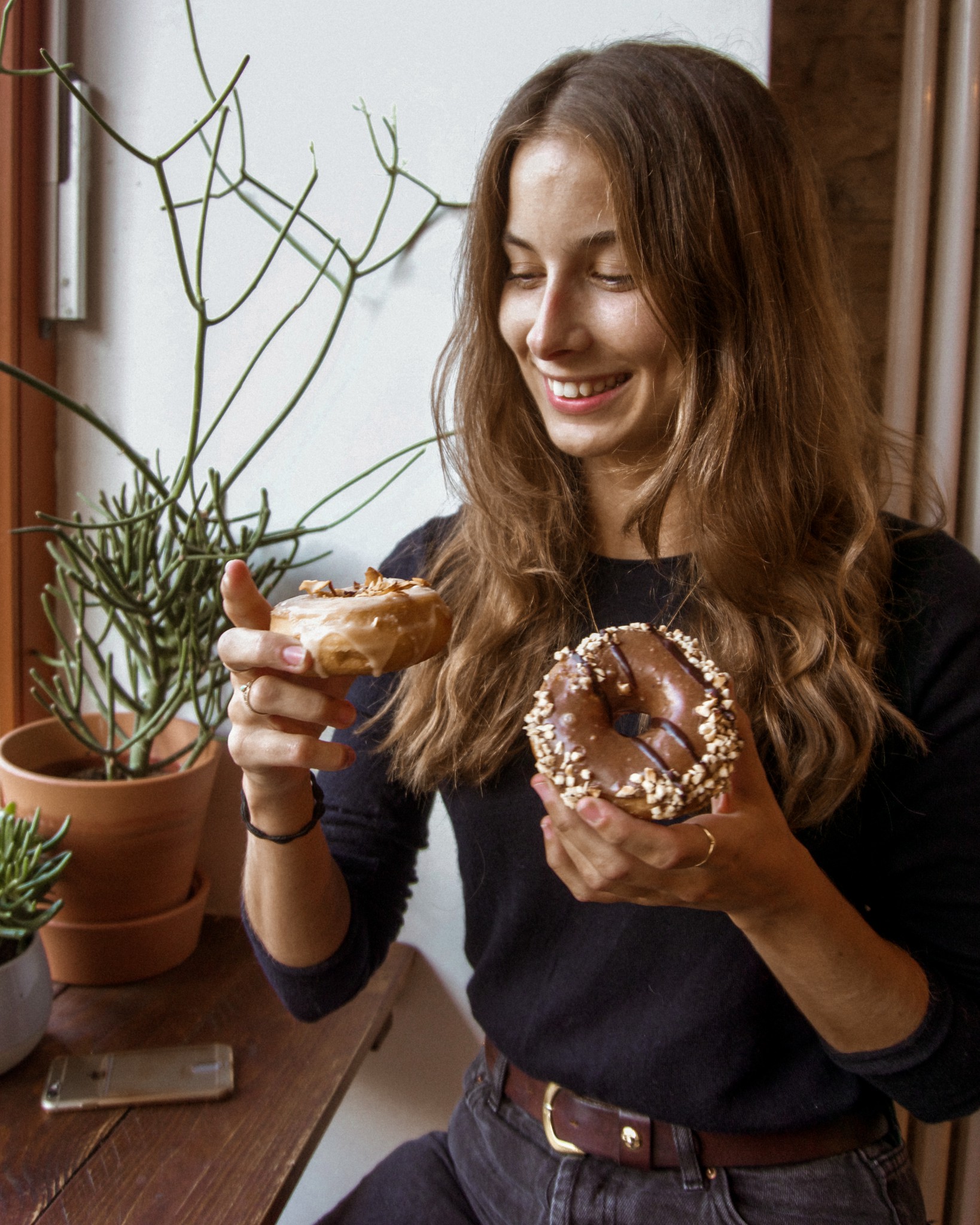 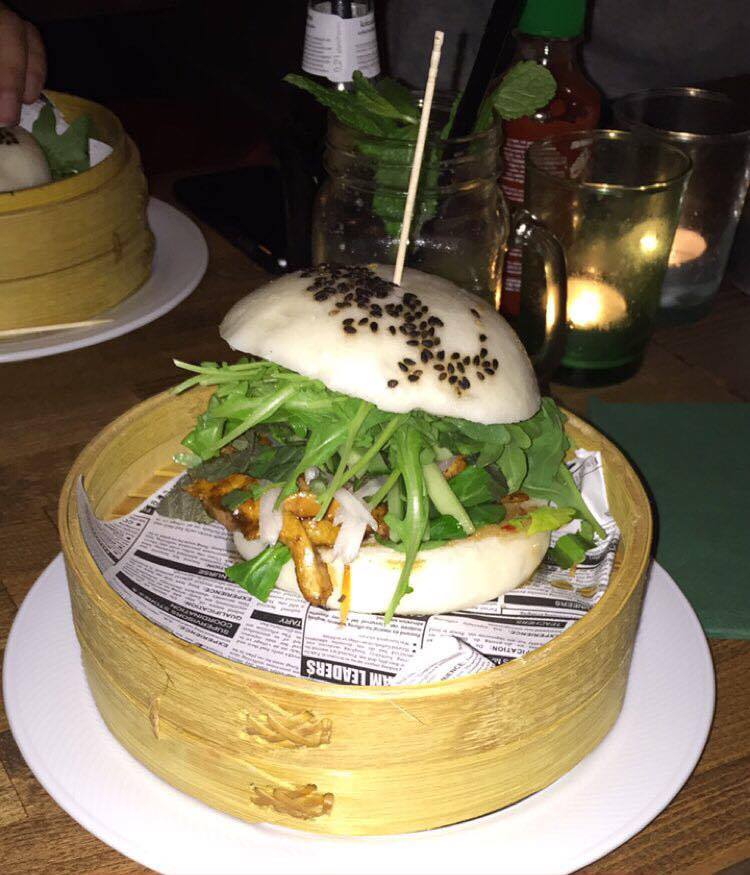 Back to vietnamese food! PHO – Noodle Bar is not all vegan but they do have quite a few vegan options. If you go, ask for the vegan Banh Bao (it’s not on the menu so you gotta ask for it) and thank me later! 🙂 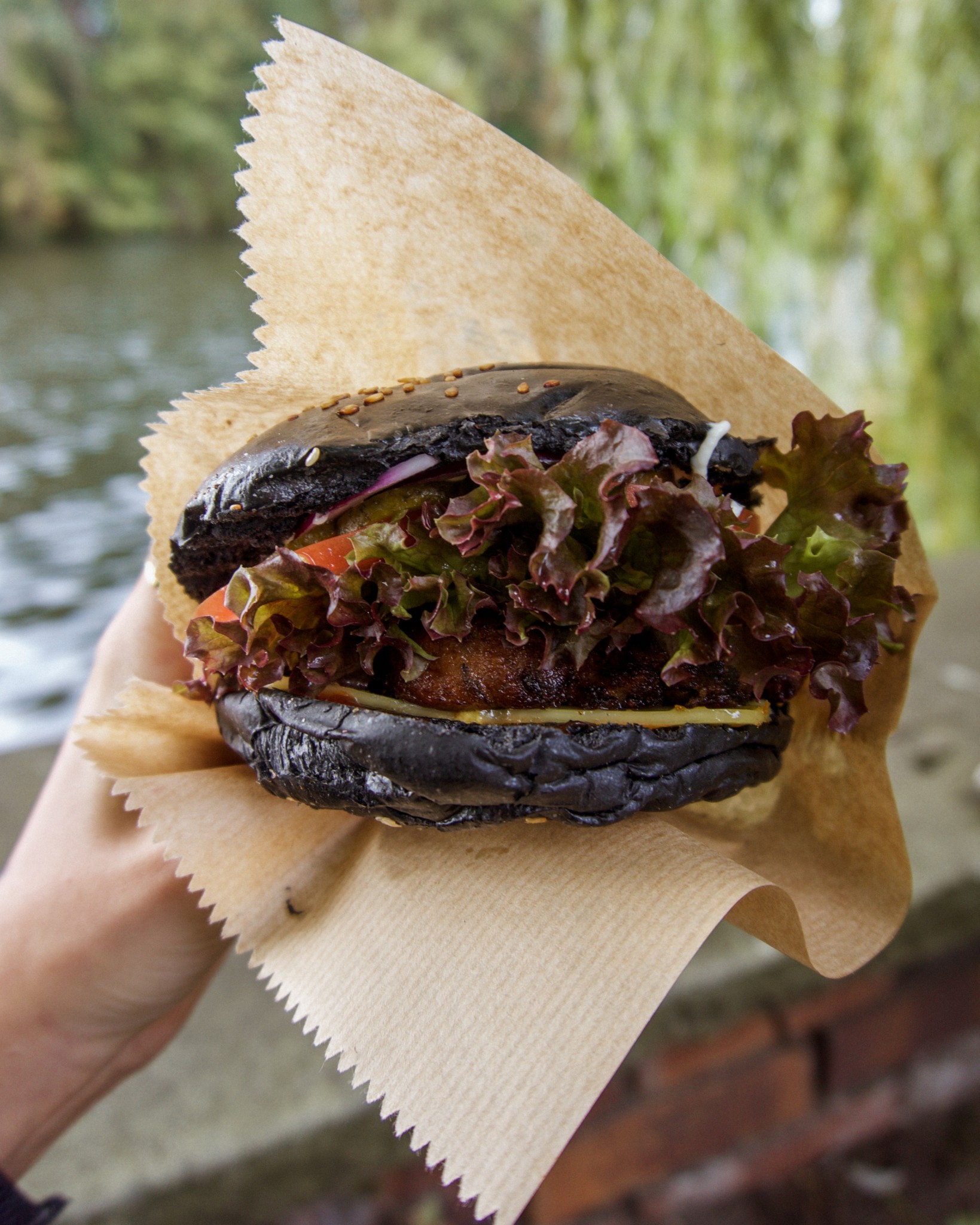 Funny name, lovely women and delicious tofu – that sums it up pretty well! Tofu Tussis don’t have their own restaurant but you can find their food truck on vegan street markets or Markthalle Neun. Their charcoal tofu saté burger was from another world and in general anything they make is amazing – so make sure to try! By the way, they also have an online shop where you can buy their creations! 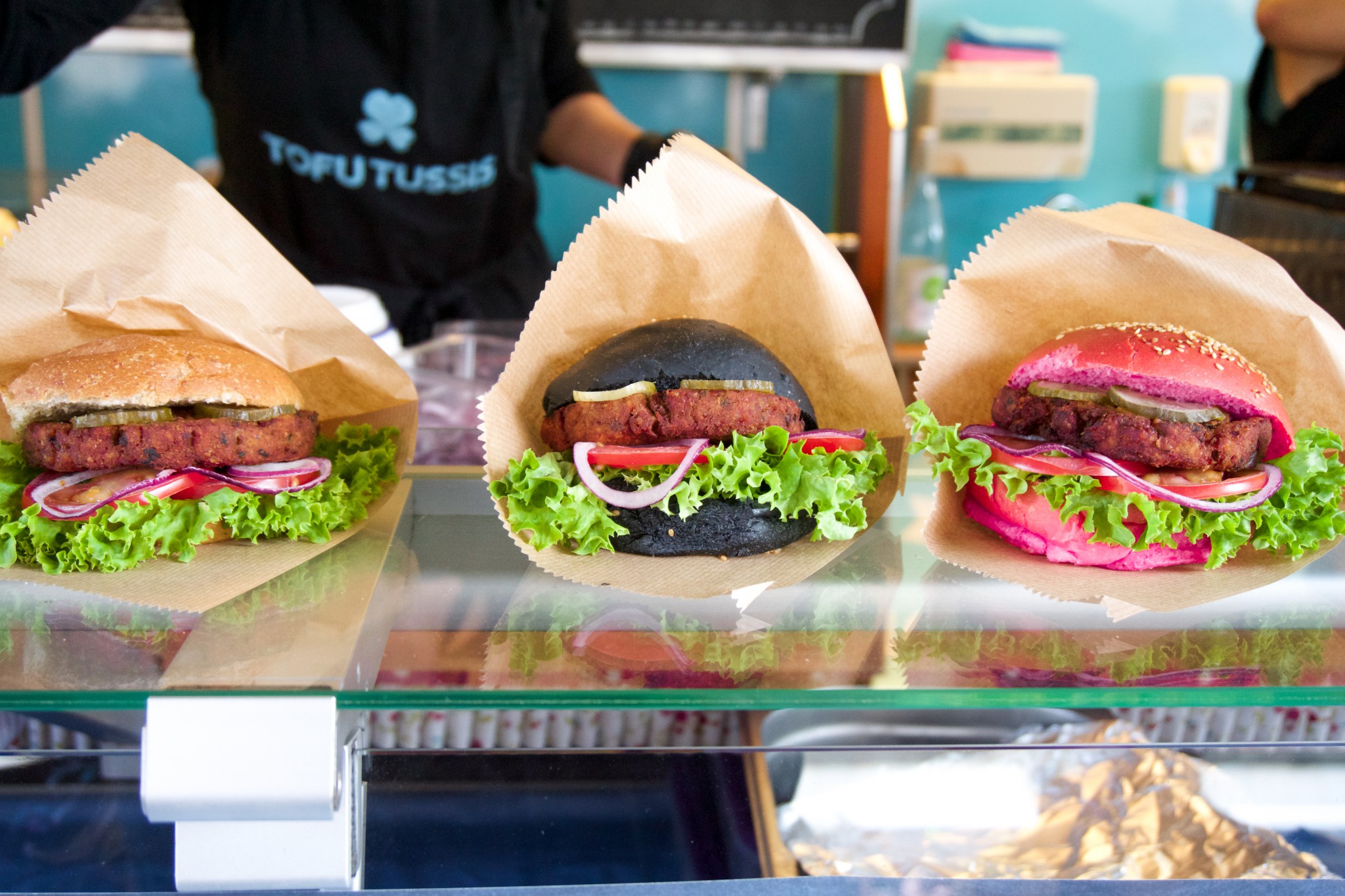 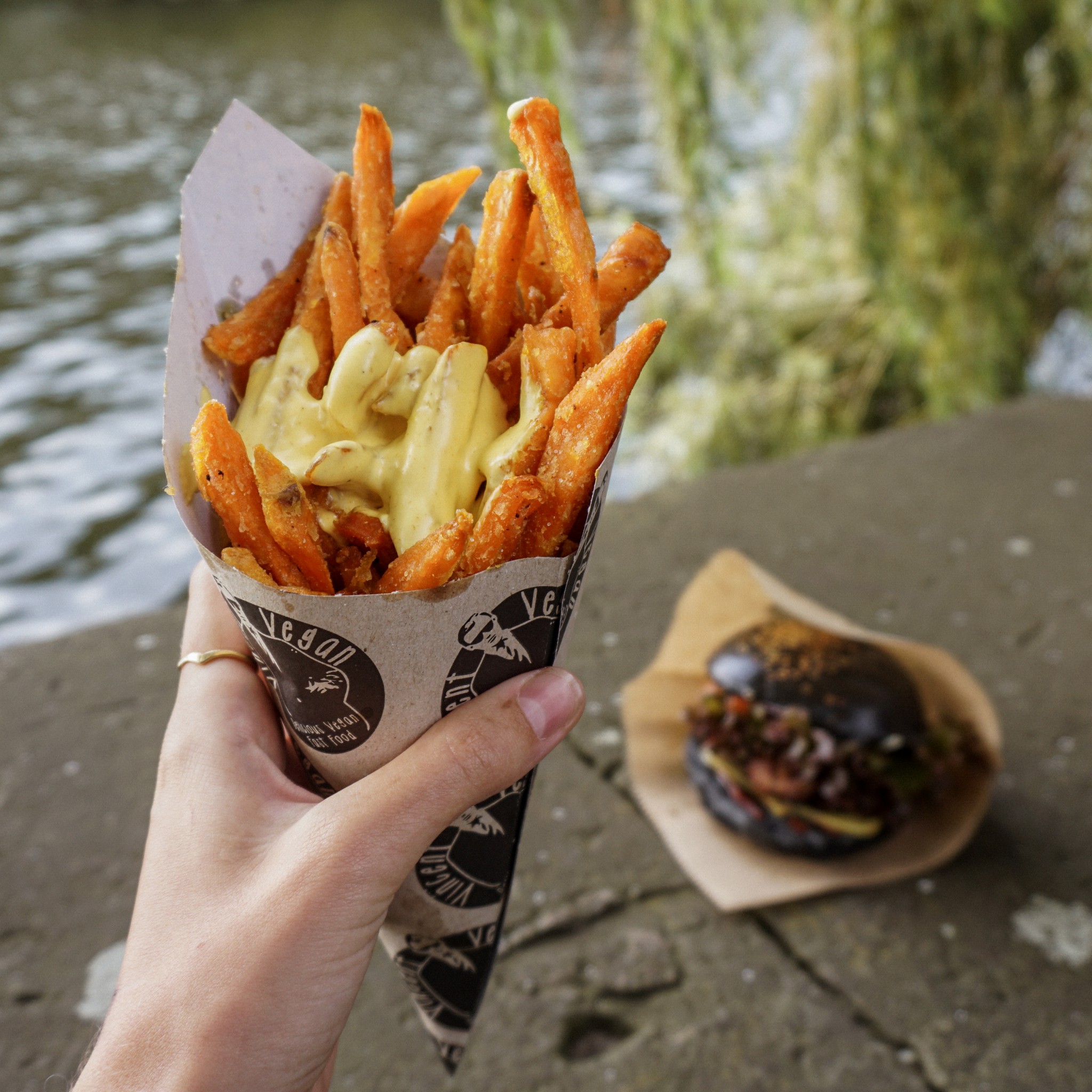 The best sweet potato fries with vegan garlic aioli I’ve ever had. Period. Vincent Vegan is a vegan brand with a restaurant in Hamburg, but once in a while you can find them touring Berlin vegan street markets with their food truck. If you find them go for the fries!!! I haven’t tried their burgers yet, but if they’re as good as the fries… oh my! 🙂 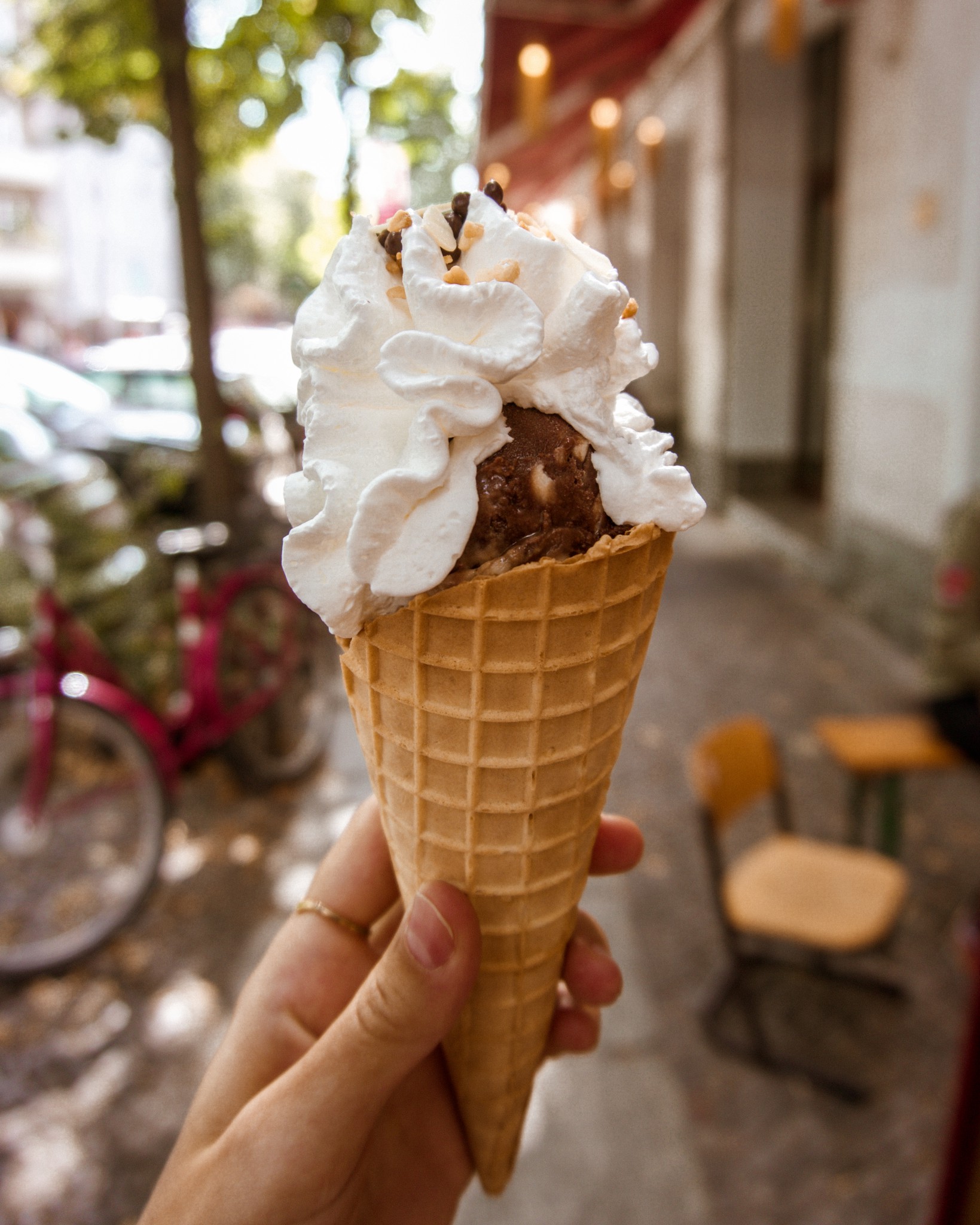 Vegan ice cream with soy whipped cream and endless toppings – do I need to say more? I’ve tried the flavours dark chocolate and hazelnut and loved them. Plus that whipped cream is something else! Big thumbs up to Balaram! 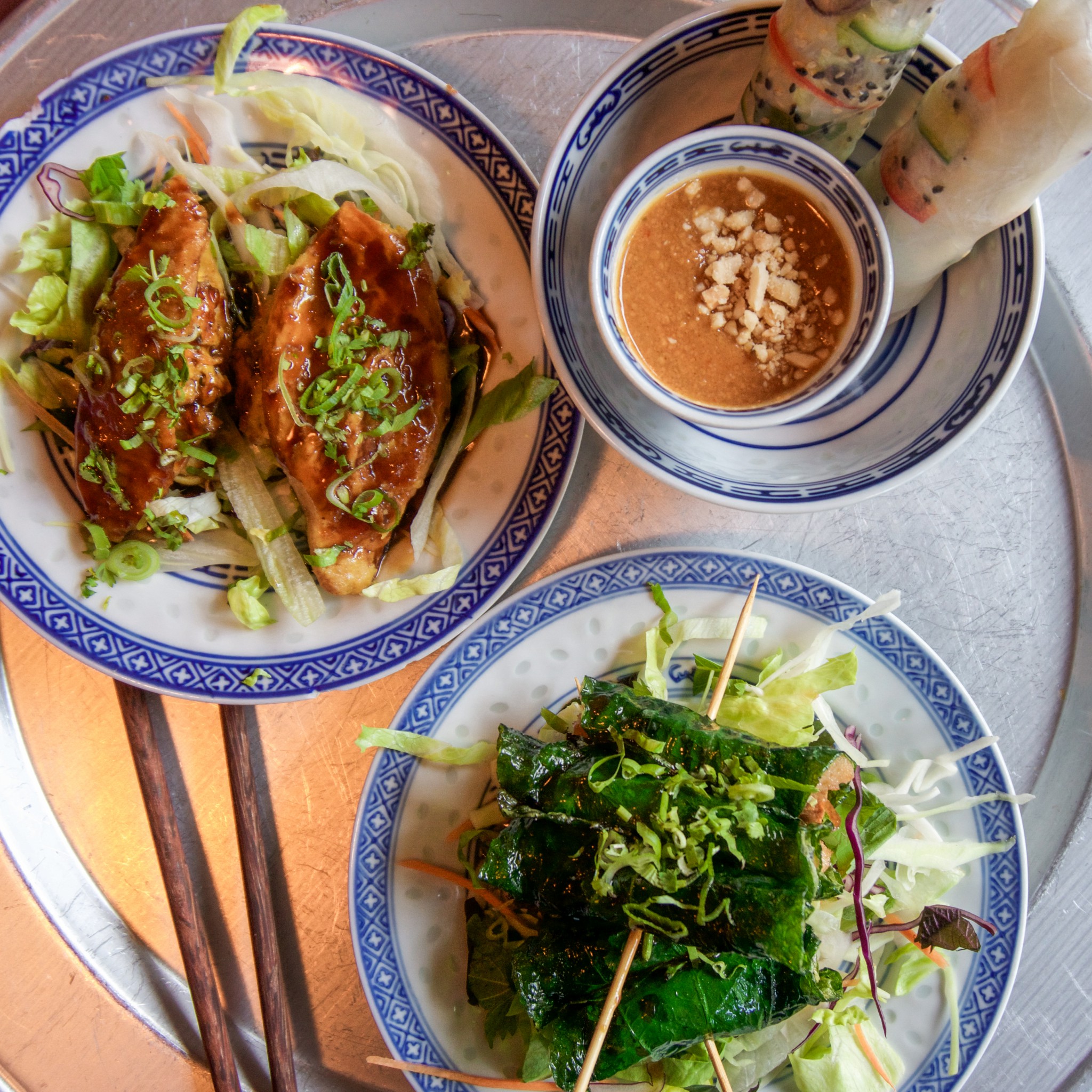 It’s time for some more… guess what – vietnamese food! 🙂 I wasn’t kidding in the beginning. I’ve never been to Vietnam yet but if the food is as good as it was in Berlin and I’ll probably have to spend quite some time there very soon! 🙂 1990 Vegan Living is another all vegan eatery, which is distinctly different from the others though. The go-to tactics here are to order a bunch of small starters and try them all as they’re incredibly delicious! I can’t remember which ones I had (apart from the Goi Cuon), but you can’t be wrong with any of them. 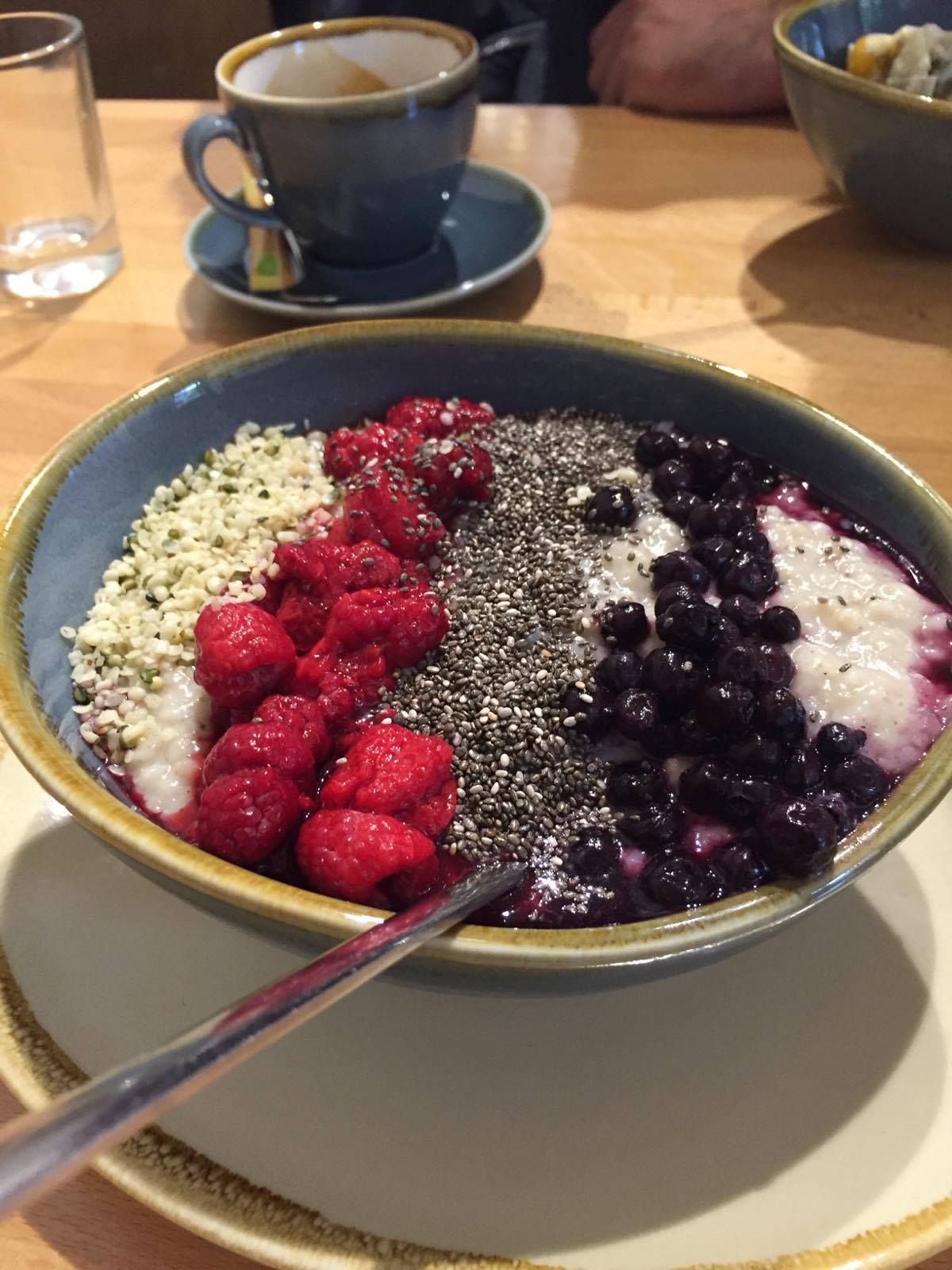 To my surprise, I’ve eaten the best vegan + gluten-free porridge at Goodies in my life. Goodies is a vegan health food café with really delicious options! I didn’t think that porridge would ever blow my mind but this one did! I think it is called superfood porridge and it tastes like a dreamy combination of rice pudding and porridge! Yum! It’s a bit overpriced in my honest opinion but still worth the try! 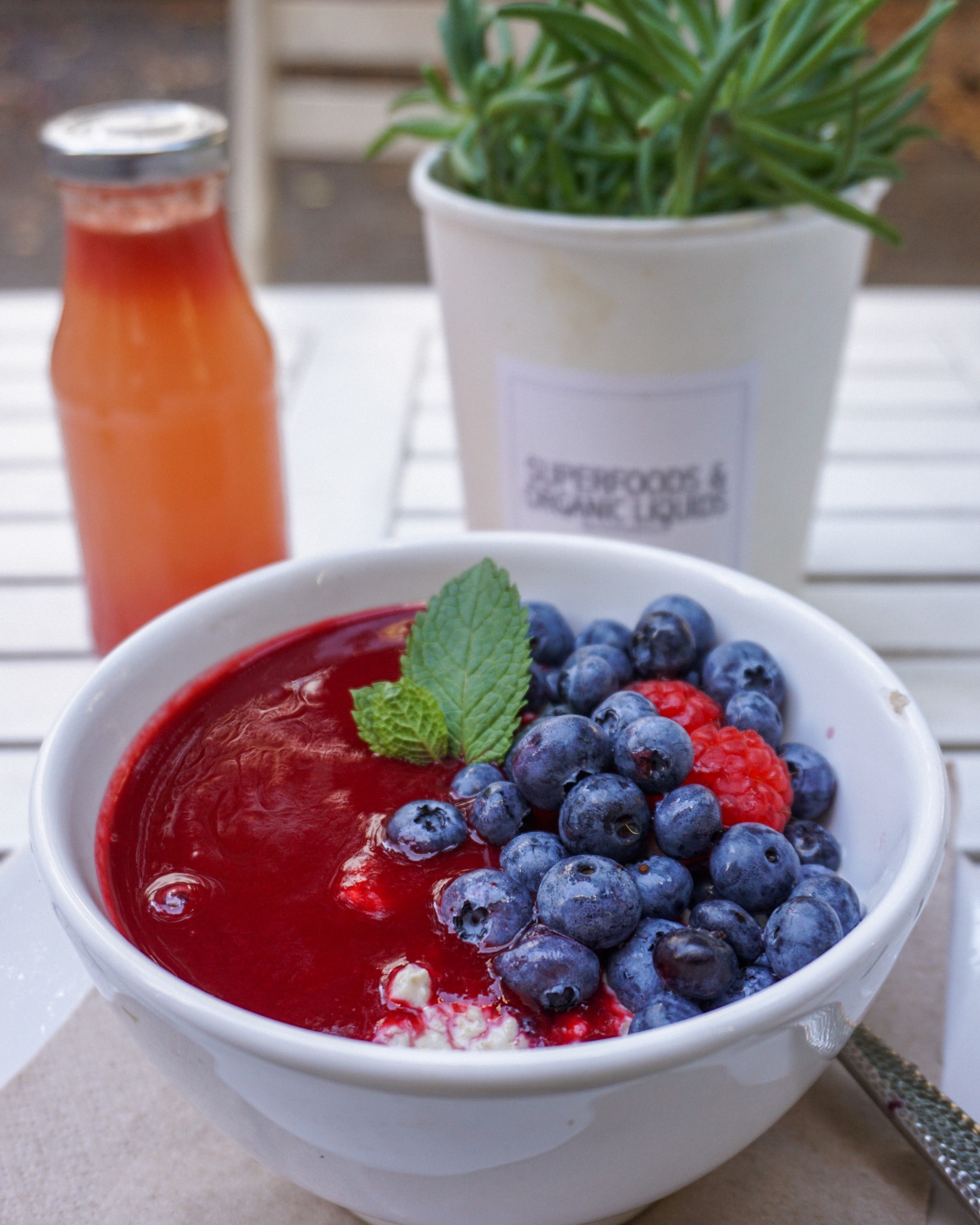 Talking about breakfast heaven, Superfoods & Organic Liquids is a must-go when in Berlin! They have anything from amazing juices and smoothies, gluten-free pancakes and bircher muesli, chia pudding and salads! Plus it’s a great little café to spend a few hours and do some laptop work! Very clean atmosphere with lovely people around. 🙂

I’ve thought hard if to mention Daluma or not, as I haven’t been there this time but rather about 2 years ago. Daluma is located just about opposite of Superfoods & Organic Liquids, but for my taste way to posh. I’m not a huge fan of those posh, super-trendy places where you go to be seen. I gotta admit though, that their açaí bowl is incredible and they really do have good smoothies! 🙂 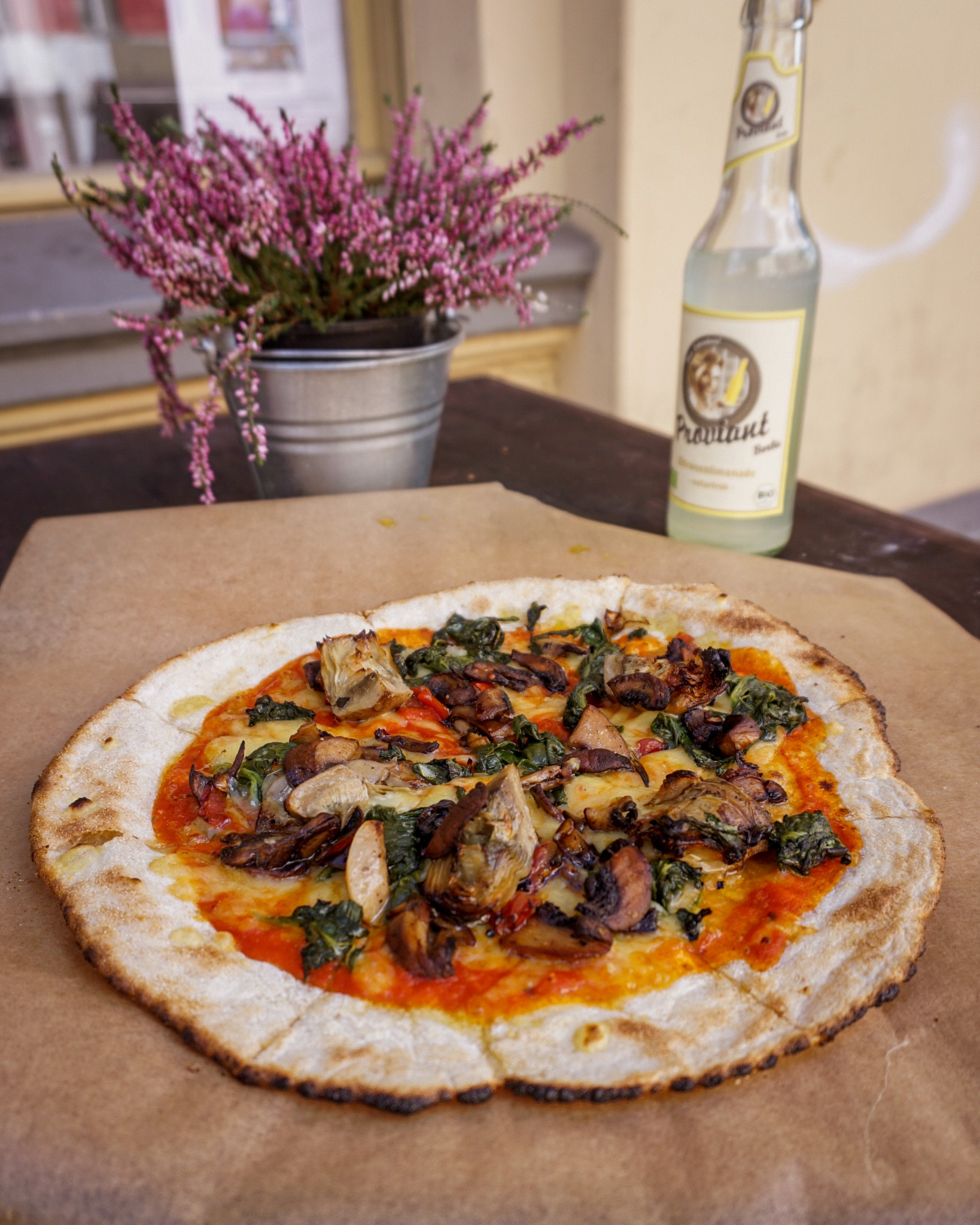 Same story with Pizzare. Not sure if to recommend it or not. The pizza was tasty but I’ve had better and I’m sure there must be an amazing vegan pizza in Berlin! If you’re in the area though and feel like pizza, go try them! You can add toppings and the cheese is actually really good! Wasn’t a big fan of the super thin dough though! 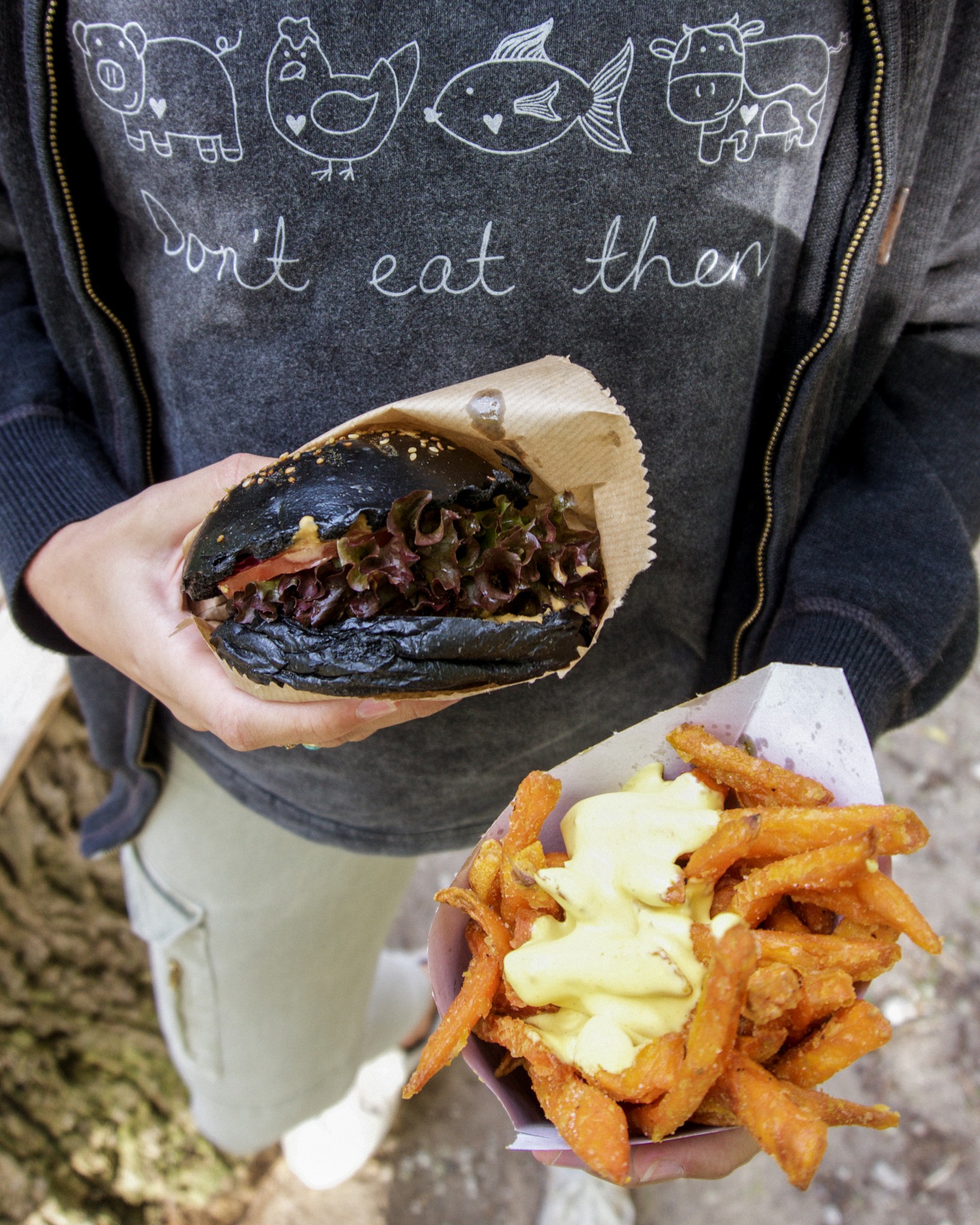 Vegan Street Market at its best! The Green Market organises vegan street markets about 4 times a year – with every season! Here you’ll find anything from delicious vegan food trucks, sustainable vegan clothing, new vegan products and so much more! They do several workshops, movie screenings and even yoga! I’ve been to their Autumn Market but I’m sure the Winter Edition will be really beautiful so if you’re in Berlin during that time, check them out! They’re located at Funkhaus Berlin (indoors + outdoors) and they also celebrate their 3rd birthday already this year! 🙂 For further info check them out on Facebook! 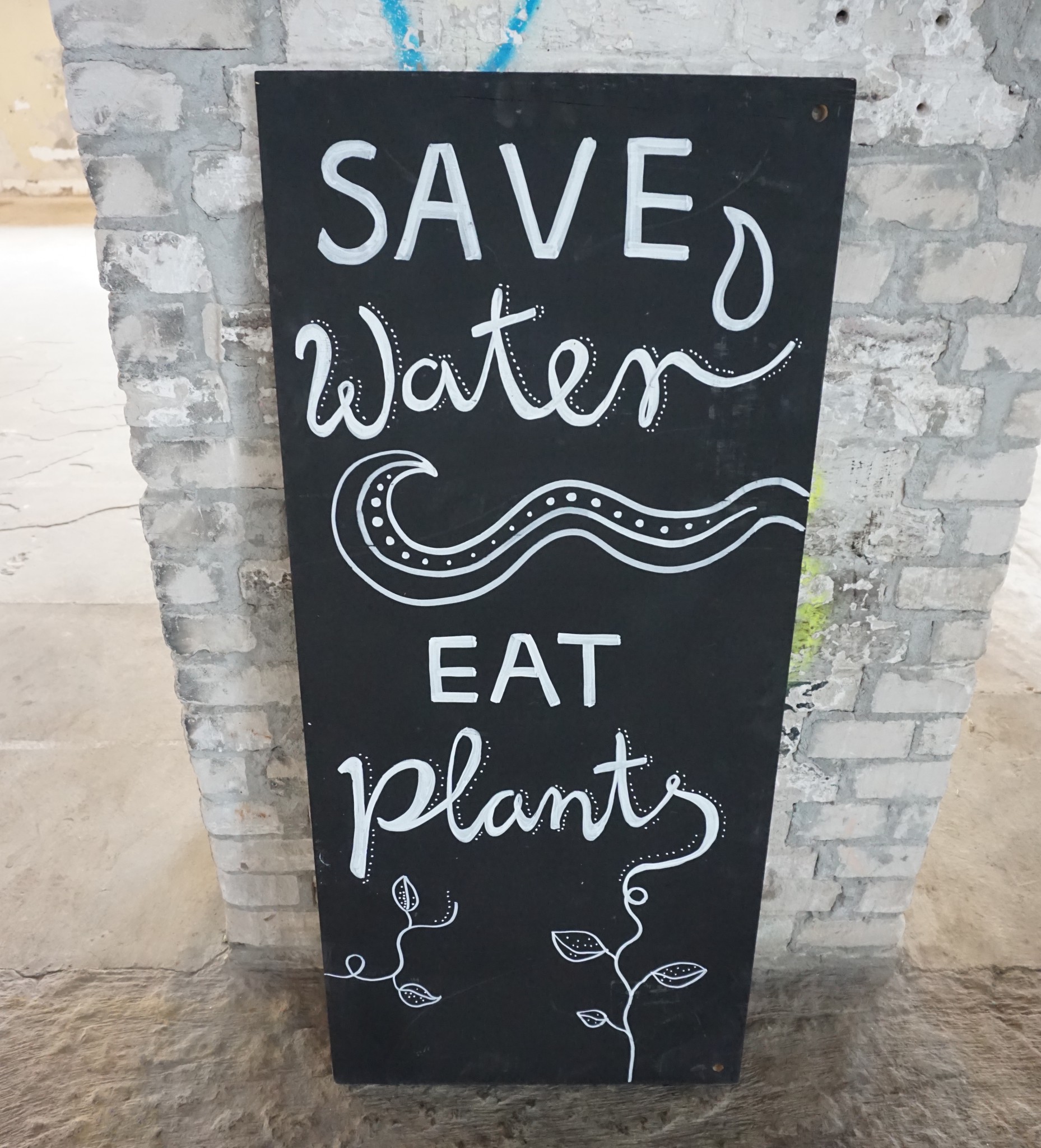 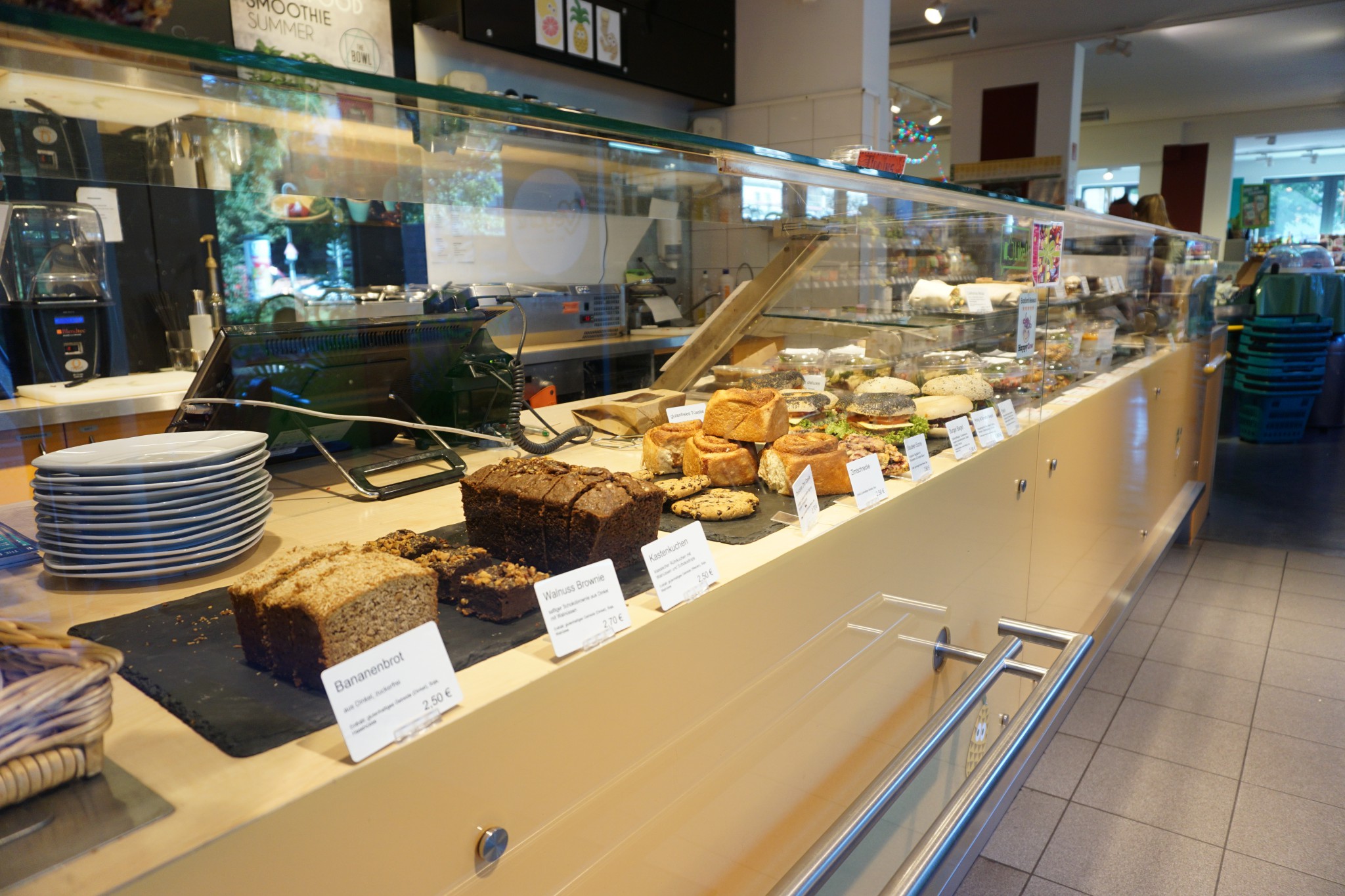 Veganz is the only all-vegan supermarket in Germany. Say what? An all vegan supermarket? Hell yeah! Meanwhile they have 10 vegan stores in Europe (Germany and Czech Republic) and keep on expanding. Just imagine going into a supermarket and NOT having to read any labels because literally everything is vegan! Such a dream and great concept! You’ll find anything from fresh produce to bulk staples (rice, nuts, beans, etc.) to vegan junk food! As a huge plus they also always have an in-house café which offers delicious vegan pastries, cakes, sandwiches, bagels, wraps and drinks. 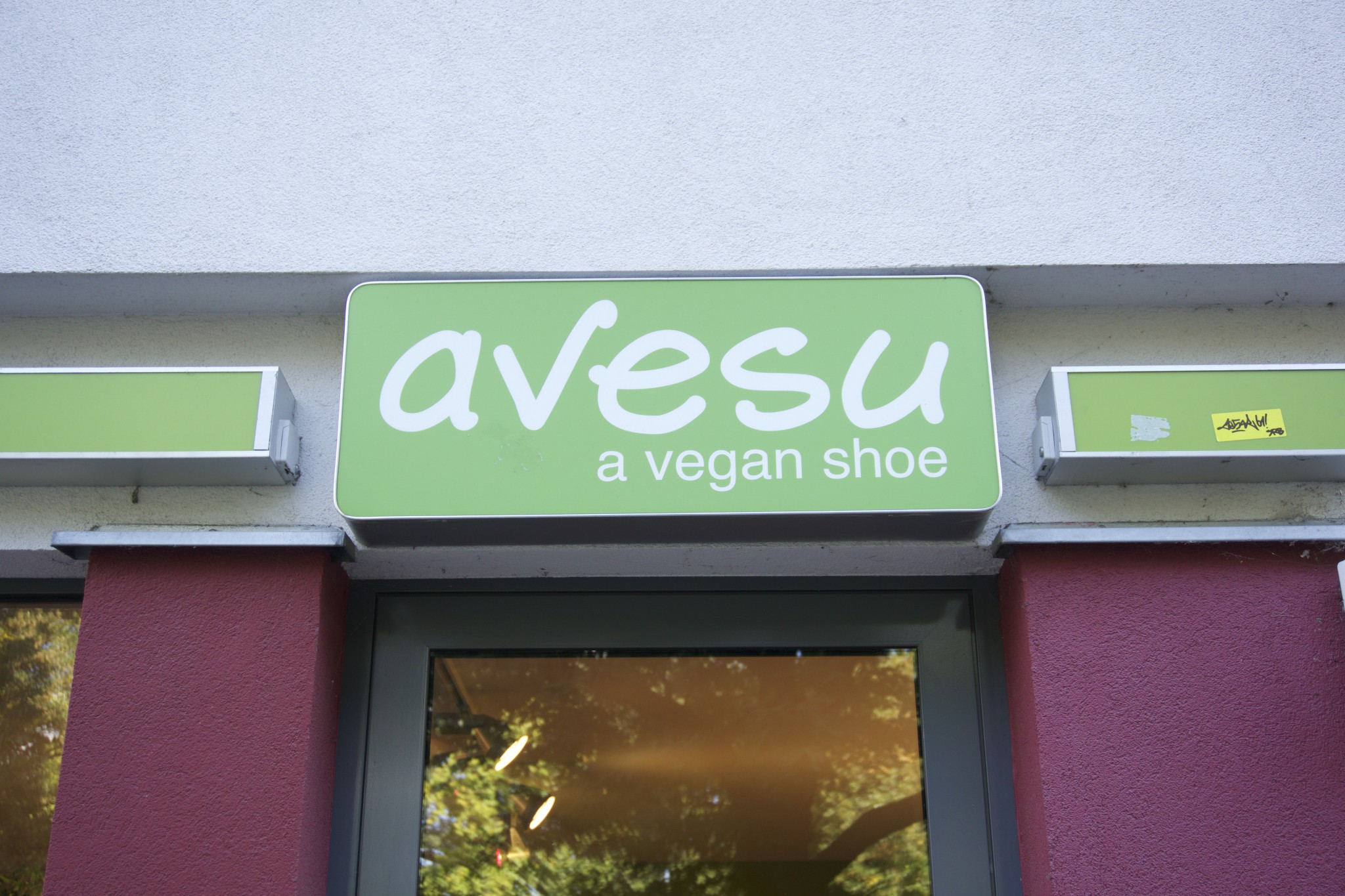 Ever had troubles finding beautiful trendy shoes because all of the ones you like have some sort of leather or other animal product on them? Avesu is your solution. A completely vegan shoe store with really pretty shoes that don’t look like hippie nature shoes (nothing against hippies or nature)! 😉 There’s 2 stores in total in Berlin and one of them is located just next to Veganz, so you kill two birds with one stone (is there a vegan-friendly saying for that btw?)! 🙂